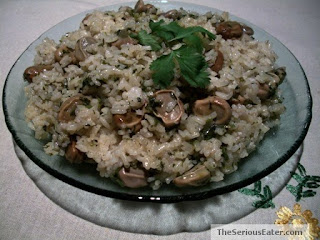 This vegan dish is so easy to make, but looks very fancy on the dinner table. This dish is filling and full of flavor, always a hit at dinner parties.
I want to say this is a traditional Egyptian dish, but if it was, it’s nearly extinct. Sadly, never seen on a restaurant menu, this savory rice dish is almost unknown to the general public. Probably originating in the country side, I suspect Fouleyya was lost along the way to the city. One alternative recipe for the rice I have tasted used lots of garlic, rather than onion. I still prefer my family recipe. As for the name, it’s not to be confused with the sweet candy Fouleyya (Peanut Brittle). Again, I am not even sure if that’s the proper name, as almost no one knows what I am talking about until I explain it, but that’s what we used to call it at home. A name is just a name when it comes to food, call it Yummy Rice for all I care, just try it out!
The ingredients are so simple, but combined make a surge of exotic flavor. The coriander is the star here, with the onion’s sweetness complimenting it without being overpowering. The beans add a filling wholesomeness to the dish, making it a meal on its own. The fava bean or broad beans, as they are commonly known, are a staple in the Egyptian diet. Foul Medammes, Taameyya (Falafel), and Besara are the most common dishes that use this legume. 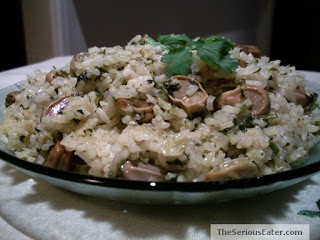 Ingredients:
2 Cups short grain rice, washed (Egyptian or Calrose rice)
3 Cups water
1 bag (400g or 14 oz) Frozen Broad Beans (Fava Beans)
1 cup Chopped spring onion or leeks [Regular onions work]
1 cup Chopped fresh coriander (aka cilantro)
2 Tbsp Olive Oil
Salt and pepper to taste.
Preparation: (Approx. ¾-1 hour)
In a pot, heat the oil and add the chopped onions and half of the chopped coriander. Add in the salt, but not the pepper. We add in the pepper later because it can get bitter when heated in oil for too long. The salt however is added now, since it allows the onions to release their water (Biology/ Chemistry 101- Osmosis) and this helps sauté the onion without letting it burn and not having to add water. When the onions are translucent, add in the bag of beans, black pepper and the water. Bring the mixture to a boil, and then cover the pot, allowing the beans to cook a little. I like the beans a little soft in this recipe, so we need to let them get started cooking first, or the rice would be ready before the beans are soft. After 10 min, add the washed rice, bring to the boil, and reduce the heat to the lowest possible setting on a medium/small burner. Cover and let sit for about 20-30 mins. Be sure not to stir the rice before that, it’s important to allow the rice to steam.
After the rice is done, fluff in the rest of the fresh coriander with a fork. It adds a fresh taste and the green contrast is beautiful.
My Experimentation:
- This recipe is just as good with peas. It’s a great variation to my basic Rice and Peas dish.
- Typically any type of rice could be used. Short grain (Egyptian) rice has a mushier texture, and along with the soft beans it’s great. But Jasmin or Basmati rice with the beans a little firmer gives a whole other experience.
- Turn it into an Asian dish, use jasmine rice and peas, and top it off with my Thai Lemongrass Chicken recipe.
- Not into beans? Or peas for that matter? Forget them!
Posted by Ameirah at 17:08