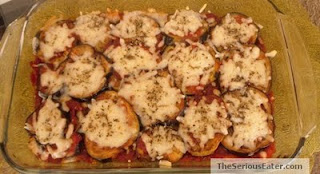 If you told me we were having eggplant for dinner when I was little, I would cringe my nose. Thankfully I grew out of that and now I love eggplant. It is amazing how filling eggplant is. This is definitely a good choice for a meatless Monday.
Mousaka is an Egyptian eggplant dish, that consists of fried eggplant, layered in a red sauce that is spiced with onion and green pepper. The red sauce has browned ground beef in it. It is then put in the oven to set.
The best known Mousaka to the Western world is the Greek one. It is much thicker, with more layers of ground beef and eggplant, and is covered in a Béchamel sauce. Also, the spices are slightly different, the two times I had it; I don’t remember it having green pepper.
There is also the Turkish Mousaka which is similar in taste, but not made in a casserole dish like the Egyptian and the Greek ones. The eggplant is diced and mixed with a ground beef mixture. I had it with bread and a yogurt salad.
Of course, the one eggplant dish which is widely known, and loved, is the Italian eggplant parmesan. The eggplant is breaded and fried and smothered in marinara sauce and topped with mozzarella cheese.

My dish is a family recipe which is a combination of the Egyptian mousaka and the Italian eggplant parmigiana. The eggplant isn't breaded though, but Italian spices are added to the sauce, and then mozzarella is added on the top. 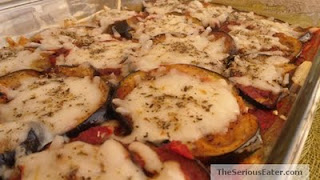 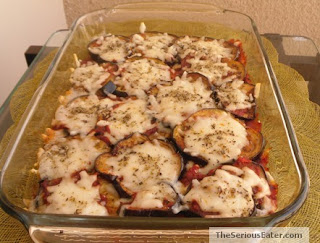 Slice the eggplant in about 1 cm thick slices. Rub both sides with salt and lay on a towel for about 15 mins minimum. This is to allow the eggplant to ‘sweat’. Sweating the eggplant reduces the bitterness and also reduces the amount of oil it will absorb. Doing this first then prepping the rest of the dish gives it enough time to sweat without wasting time. It is recommended to wait 30 mins up to 1 hour, but 15 mins is sufficient if you do not have enough time. You should be able to see little droplets of moisture by then, if not then wait 5 more mins and then check.
In a sauce pan, add 1 tablespoon of olive oil, add in the garlic, onions and green pepper. Add in the salt, and lower the heat and allow the onions to ‘wilt’ and become translucent. Add in the crushed tomatoes, stir well. Allow to cook for 5 mins. Add in the tomato paste, oregano, basil and black pepper. Add in 1 cup of water if needed, it will depend on how juicy the tomatoes are. Cover and allow to simmer for 20 mins on low heat. We want to sauce to be thick, not watery, so if there is too much water, keep the cover open a crack.
Add oil in a frying pan and put on high heat.
By this time, your eggplants should be sweating. Rinse them off and dry them very well. It is important to make sure they are dry, so they don’t splatter in the hot oil. Put the eggplant in the hot oil. Do not overlap the slices in the oil.  You will need to flip each one over once. They are ready when they are golden-brown on each side. Be careful not to burn them, because once they start to take color, they will go black fast. After taking them out, place them on paper towel to absorb the oil. I also like to blot them, applying slight pressure to remove excess oil. Do not press too hard as not to puncture them. 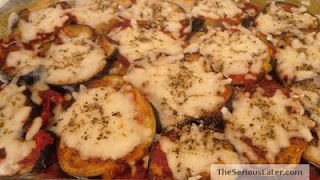 In a pan, I prefer ovenproof glass as it always looks prettier on the table, add 1 ladleful of the sauce and rub around evenly. Add in the eggplant side by side to make one layer. If you will serve as an appetizer, one layer is enough. If it is a main dish, then you might like to add another layer of eggplant, after adding some more sauce.
Add parmesan cheese to the top, sprinkling lightly. Then add the mozzarella cheese. Cover with aluminum foil and put in the oven for 30 min, uncovering for the last 10 to brown the top if desired.
Enjoy!
Which Eggplant dish from around the world is your favorite?