Ice Cream is not a new delicacy, since early versions of it have been traced back to the ancient Persians. Their version was more of a sorbet, which comes from the Arabic word for syrup, “Sharbat”. It was shaved ice with fruit juice poured over it. It is also claimed that Marco Polo brought the idea to Italy from China, who also enjoyed their version of cooled ice desserts. 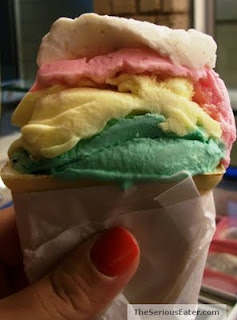 Fast forwarding to the 10th century, the Arabs used milk and added dried fruit and nuts to the dessert. They also added mastic (mestika) while making the ice cream, and that is what gives the Arabic ice cream (Bouza Araby) its distinct chewy texture.
Then it was popular in Europe. Italy, France and England all had ice cream fever, and it eventually travelled across the Atlantic to the new world. The recipe was changed and tweaked as it traveled, eventually reaching the classic creamy milk ice cream we now know.  The rest is delectable history.
This summer found me in Lebanon for a week, and being a frequent visitor, I already had Lebanese bouza on my mind.  The ice cream is chewy, and that distinct texture makes ‘scooping’ it out of the tubs a bit different. Usually it will be scooped out with a spatula-like utensil, almost identical to a spackle knife. The traditional cones are rectangular wafer cones. The thing I love the most, being a very indecisive person, is the fact that it’s quite normal to order multiple flavors. If you are unsure what you want, then just have a cocktail which is a bit of each flavor.
Distinct and unique flavors which I have seen include lemon blossom, rose water, pistachio, roasted almonds, orange, cream with mastic (Ashta), milk (Haleeb) and bubble gum.
In Beirut, the best Bouza I have had so far is at Rachad’s in Karakol El Druz. Not on a main street, this shop will make you really look for it; I always seem to get lost. But it is worth it, totally worth it.
I have never made homemade ice cream, and I think it will be my next endeavor.
What is your favorite flavor?
Posted by Ameirah at 20:15