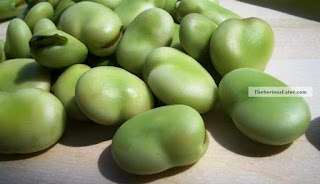 ** This is part of my vegan Soup to Nuts fava bean recipe series. For a list of different recipes, check out this post about fava beans! **
Side road street sellers, with their little donkey carts with mounds of the bean pods, yelling out their produce is quite common at this time of year. The fresh fuul [Fava bean] season is just another excuse for us Egyptians to snack, just like our love for roasted seeds.
I never had this Egyptian snack fresh, since we were never in Egypt when I was little during its season. We only were able to get frozen bags of the beans to use in a spiced rice dish.
How to snack on Fuul Heraty?
This is typically how Egyptians eat this legume when it is season.
Basically, you open the pod, and pop them in your mouth. But be careful, after a while, your fingers will get a little stained [like a grass stain]. If you are having people over, I suggest you remove the beans from the pod yourself, and then put the beans in cold water until your guests arrive. Drain, sprinkle some salt [optional], and enjoy!
What less known traditional snack do you know?
Posted by Ameirah at 09:43